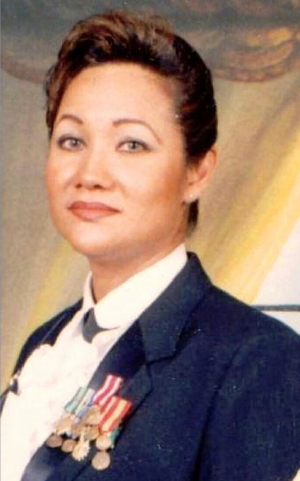 The service will be available for viewing later Wednesday afternoon and will remain on our website for 90 days.

A celebration of her life will be held at 1 p.m., Wednesday, September 15, at Munden Funeral Home in Havelock. The family will receive friends following the service. For those unable to attend, the service can be viewed through her obituary page on Munden Funeral Home’s website.    (See link below for the Service Bulletin including the Order of Service.)

Inez was born on October 3, 1967, in Altus, Oklahoma, to the late Enrique and Susana Lopez and was blessed with a large family consisting of 13 siblings. After high school, Inez honorably served in the United States Army for 20 years as a Human Resource Specialist. She attended Vincennes University in Indiana where she received an Associate of Science Degree in General Studies in 1996. Continuing her education at the International Correspondence School in Scranton, Pennsylvania with a diploma in Animal Science that same year.

Inez received numerous accolades and awards for superior performance and utilization of interpersonal skills during her military career. She was awarded the Bronze Star Medal in October of 2005, for meritorious service while serving as the Chief Administrative Officer and Casualty Section Supervisor for the 20,000 soldiers of the Multinational Corps in Iraq. The Meritorious Service Medal in December of 2002, for service as the Executive Secretary for the Commanding General, 2nd Infantry Division, Korea. A second Meritorious Service Medal in January of 2002, for service as the Supervisor of Personnel Services for the Army's Recruiting Command in Las Vegas, Nevada. And last, but certainly not least, The Humanitarian Service Medal in January, 1992 for contributing to the relief of Haitian refugees at Guantanamo Bay, Cuba.

As an expression of sympathy, flowers are welcome.