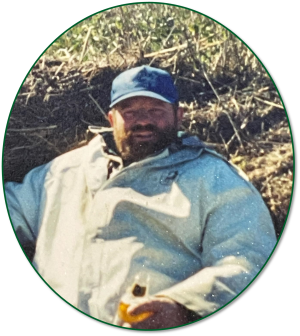 His funeral service will be held at 2 p.m., Saturday, October 16th, at Cedar Island Community Cemetery, officiated by Rev. Kevin Stott and Rev. Nelson Koonce. The family will receive friends an hour prior to the service. The service will be available for viewing later that day and will remain on his obituary page on Munden Funeral Home’s website for 90 days.    (See link below for the Service Bulletin including the Order of Service.)

Richard was born on December 19, 1961, in Sea Level, North Carolina. Fishing was in his blood and at a young age, he followed his passion to be on the water where he worked diligently his whole life. As a proud union member of the Local 25, he began working on dredge boats in 2004 and later became a captain on tugboats which was a role he thrived in. Being gone from his loved ones for long periods of time was difficult for him but he did what he had to do to support his family.

When not on the water, he could be found gardening or deer hunting, whatever it was he loved being outdoors. Being a duck hunting guide was another role he excelled in and enjoyed doing for numerous years. Shrimping and mullet fishing were other activities he enjoyed which also reaped a great meal for his family and friends.

Richard was never for a loss of words. He could tell a story like none other and always held people’s attention with his humor and personality. Back in the day he was called King Pin so you can imagine the stories he could tell were rather interesting. And who can forget the great family oyster roasts, no matter what he did, he made sure it was fun and entertaining for all. His greatest joy was spending time with his family and grandchildren.

As an expression of sympathy, flowers are welcome, or donations may be made to Cedar Island Community Cemetery Fund at P.O. Box 660, Cedar Island, NC 28520.