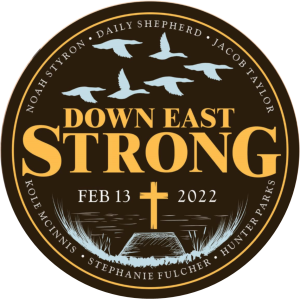 Sunday, February 13, 2022, is a day that will forever be etched in our minds and hearts. On this day we experienced the tragic and unexpected loss of Noah Lee Styron; our son, brother, grandson, nephew, cousin, neighbor, classmate, and friend to all. In what will forever be known as a horrific tragedy for Down East, Noah lost his life with seven others, including three dear lifelong friends as they returned from an amazing youth and veteran duck hunting weekend. We are so very grateful that his last memories were with people he loved, doing what he loved.

Noah was born May 28, 2006. Noah was a sophomore at East Carteret High School. He was a member of the school’s chapter of Future Farmers of America (FFA). He attended Cedar Island United Methodist Church.

He was a young man with many plans and projects, always dreaming of his next overhaul. His love for his family and friends was deep and genuine, as well as for anyone he ever met. Noah preferred a simple life, loving to fix just about anything over making a new purchase. He beat to his own tune, never stressing over trying to make an impression, yet walking through life making a lasting impression on all those he met on his brief yet powerful journey. He was a role model to anyone who was blessed to know him. He was admired for his brilliant mechanical abilities and his engineering skills which were skilled well beyond his years. There never seemed to be an undertaking or an order too tall for him to accomplish. For even at times, he could be found sewing up his favorite hunting coats with his sister’s help.

Noah was an experienced waterman with knowledge of the local waterways well beyond his years. His true passions were hunting, fishing, everything outdoors, fishing for anything with Granddaddy, being on the water with Zack Davis on the Addie Dallas, crabbing with his “Uncle As”, riding dirt bikes with his brothers, and of course being an avid sportsman. He was a skilled mullet fisherman, once catching over 100 lbs. by himself in his own little boat during his Uncle Johnny’s mullet tournament. He was a certified welder with the unique talent of fabricating just about anything. Such inventions included installing a tip muffler from a diesel truck onto his dirt bike and modifying several riding lawn mowers into high-speed racing machines and even using them for launching his boats.

He earned the ECHS Welding II award his freshman year. While attending Down East Middle School he also earned NC state recognition as an accomplished Young Author with his poem, Mullet Fishing. Noah was never at a loss of words, as evidenced by his many stretched out stories and “tales of a Down East boy.” During his years at Atlantic Elementary he earned the admiration of not only his teachers but his classmates who are forever faithfully intertwined with him.

He was preceded in death by paternal grandfather, Richard A. Styron, Jr. and great uncle Johnny Styron.

Noah’s funeral service will be held at 2 p.m., Sunday, February 20th at Cedar Island United Methodist Church, officiated by Rev. Nelson Koonce. The family will receive friends from 5 p.m. until 8 p.m., Saturday, February 19th at Cedar Island United Methodist Church. The service will be live streamed at Atlantic Elementary School Auditorium and will also be available on Noah’s obituary page on Munden Funeral Home’s website. A private interment will take place at a later date at the Ronald and Becky Goodwin Memorial Family Cemetery.  (See link below for the Service Bulletin including the Order of Service.)

As an expression of sympathy, flowers are welcome or memorial contributions may be made to the Core Sound Waterfowl Museum and Heritage Center in c/o Core Sound Family Fund, P.O. Box 556, Harkers Island NC 28531.

To send flowers to the family, please visit our floral store.