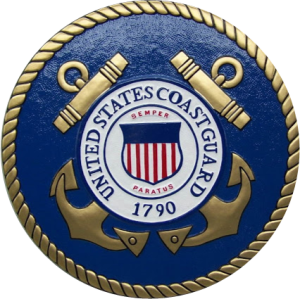 His funeral service will be held at 11 a.m., Friday, January 14th, at Grace Holiness Church, officiated by Rev. Curtis Going. Interment will follow at the Lewis Cemetery.  The family will receive friends from 6 p.m. until 8 p.m., Thursday, January 13th at Grace Holiness Church.   For those unable to attend, the service can be viewed through his obituary page on Munden Funeral Home’s website. The service will remain on the Funeral Home website for 90 days.

Dennie was born on Harkers Island, North Carolina, on December 27, 1933, to the late John and Helen Lewis. He did the majority of his schooling on Harkers Island and later at Smyrna after the high school on the island closed. He completed his high school at America High School in Chicago, IL, graduating in 1955.

At the age of 17, during the Korean War, he joined the U.S. Coast Guard and served over 29 years, active and reserves, retiring in January 1981, as a Senior Chief Boatswain Mate. He worked over 34 years at the Rework Facility at Cherry Point, retiring in 1989, as an Aircraft Quality Assurance Inspector.

In 1956, Dennie married Barbara Ann McGowan from Vanceboro, and they had three daughters, Evangeline, Belinda, and Dena. As the Lewis family grew, they had nine grandchildren and two great-grandchildren.

Converting to the Christian faith on January 26, 1969, he happily shared his joy, serving in multiple areas of the Church. His ministry involvement included teaching the teen boys Sunday School class over 4 years, serving as assistant Sunday School Superintendent and was the Treasurer for over 4 years. His skills where also used in remodeling and building 3 churches. Dennie’s faith and love for the Lord never wavered.

Dennie loved the sea and spent much of his youth working and playing on the coast, from Cape Hatteras to Cape Fear where he enjoyed working on the boats with his father. His quick reflexes and fierce fatherly instincts were used when he saved his daughter Evangeline from a tide line at Shackleford Bank near Fort Macon. Those skills were also put to the test when he saved a drowning girl in a pool in Virginia, his niece on the Harkers Island Bridge, and various sea rescues with the U.S. Coast Guard.

As a dedicated American Legion member, he worked with fellow members to enhance the well-being of America's veterans, their families and community by helping in anyway possible when a need arose.

In addition to his parents, he was preceded in death by wife, Barbara Ann McGowan Lewis, on November 29, 2019; sisters, Ethel Fay Gillikin and Sharon Kay Guthrie; and brother, John Lewis of Harkers Island.

As an expression of sympathy, flowers are welcome, or donations may be made to Grace Holiness Church or the Salvation Army.